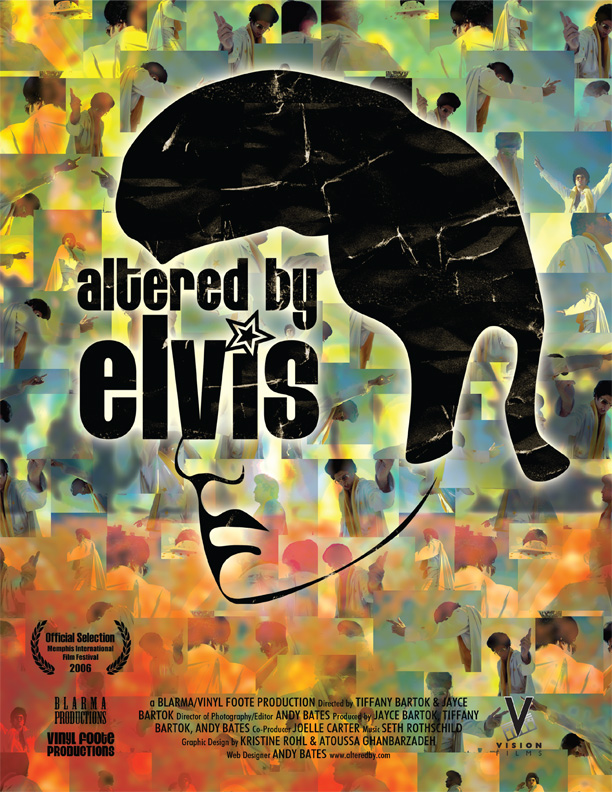 A year long journey from coast to coast, from shrine to shrine, reveals a world that Elvis left behind. Why does this celebrity who has been gone for almost 30 years still make $40 million a year? ALTERED BY ELVIS follows those who have been imprinted, inspired, fathered, enlightened, driven, fulfilled and even destroyed by the King of Rock ‘n Roll. Get a first hand look at what it is like to be ALTERED BY ELVIS.

ALTERED BY ELVIS, a 54 minute documentary shot on location across the U.S., is a moving, and often hilarious, exploration of lives fathered, fulfilled, and even destroyed by the King of rock and roll. From extreme fans to loyal loved ones to those who make their living off the King, ALTERED BY ELVIS digs deep to expose the stories of those he left behind. Listen to Larry Geller recount styling Elvis' hair for the star's heartbreaking funeral, Vicki Fritz explain why she moved from Milwaukee to Memphis to be near the King's grave, and Jimmy Denson reveal his explosive reasons for hating Elvis more than any man alive! The camera doesn't flinch as it captures rich stories from Dixie Locke Eammons (Elvis' first girlfriend), Alfred Wertheimer (famed Elvis photo journalist), and StingRay (NYC's #1 tribute artist). With over twenty diverse interviews, an original rockabilly soundtrack, electrifying photographs and archival footage of Elvis, and beautiful location shots of Memphis, TN; ALTERED BY ELVIS is a bizarre, yet surprisingly heartfelt, documentary portrait of true American characters touched by our first real rock icon. Come get ALTERED BY ELVIS!!!!!