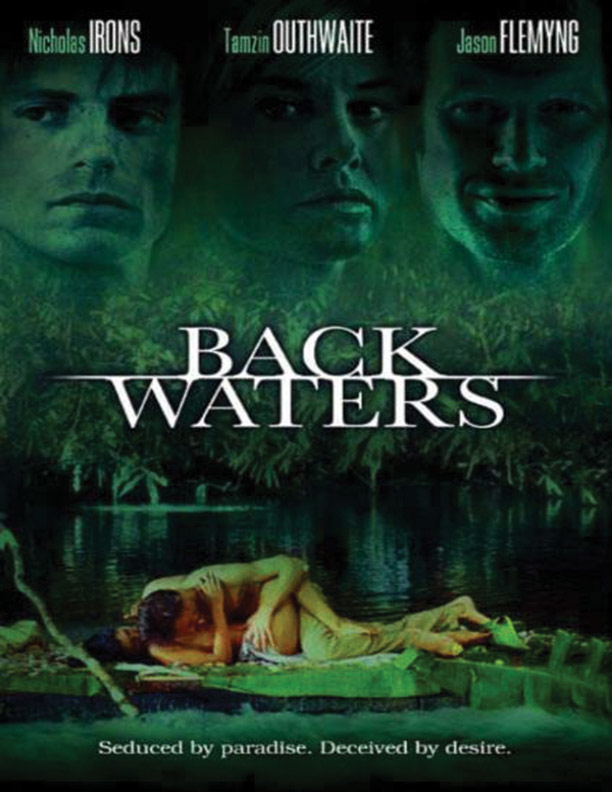 A famous actress has gone missing in the backwaters of the Kerala Spa in India, and her cheating husband is framed for her murder.

A wealthy British couple, Andy, a writer, and Lili, a soap-opera star, get into a car accident, returning home from a big party at Lili's American step-brother, Jason's sprawling estate in the English countryside. The accident leaves the wife paralyzed below waist while the husband who was driving, miraculously escapes unhurt. Months of treatment and physical therapy don't improve Lili's condition. She is bitter and angry and holds her husband responsible for her condition. Consumed by guilt Andy takes her constant beratings quietly. The marriage is undergoing tremendous tension. The doctor suspects the paralysis to be psychosomatic; perhaps alternative medicine should be considered. Jason recommends that the couple go to KERALA on a vacation. He had gone there before to shoot a documentary for the Discovery Channel. He suggests that Kerala's Ayurvedic Herbal massages may heal her injury and a vacation together may heal their marriage. The couple arrives in Cochin and rent a houseboat on the backwaters. They hire a masseuse who starts the wife's herbal therapy treatment. While she undergoes her massage, the husband goes for long walks pondering his situation. During one such walk along the backwaters, he notices a very beautiful dusky woman bathing in a waterfall. This is Sara. He is unable to take his eyes off her, watches her with guilt. Next, he sees her as a dancer at a felicitation organized by the hotel to welcome his wife. Andy keeps running into her, in art galleries, restaurants as if they were destined to be together. A relationship develops. One day he finds her sobbing quietly to herself. Persistent inquiry reveals she is a physically abused woman by her fisherman husband who is presently out at sea. Andy is emotionally abused by his wife. The two victims are gradually drawn towards each other and become lovers. Andy looks forward to his afternoon trysts with Sara, while his wife is going through her massage treatment. One day when Andy returns to the houseboat, he finds his wife missing. Her wheelchair is on the deck, but she has disappeared. The police is called, who begin their search. The next morning, Lili's body is caught in the nets of a fisherman named Thomas Varghese. The autopsy shows she was strangled before her body was dumped in the water. Andy becomes the prime suspect, as he was the beneficiary of a multi-million pound life insurance policy on Lili. When he is arrested, he tells the police officer that he wasn't even there at the time of his wife's death because he was with his lover. The cop says only if she gives an alibi, he can be released from custody. The cop visits Sara's home. Her fisherman husband, who is now back from sea, opens the door. This is the same fisherman, Thomas Varghese, who found the body, earlier in the morning. Thomas refuses to let the cop question his wife without his presence. Sara denies ever having seen the Englishman. It seems like Andy's fate is now sealed, as he will have to face the charge of his wife's murder. However, the cop notices the discomfort in the mannerism of the woman. His intuition tells him that the case is not as straightforward and simple. Jason comes from London to claim his sister's body and organize her burial. As the story progresses, the cop comes to know that the fisherman, Thomas, replaced the regular masseuse the day of the murder. We learn that Sara was set up by her husband to sleep with Andy, to keep him away from the scene of the crime. The cop also discovers that Thomas, was a subject in Jason's documentary. Eventually, we find out that Jason had hired Thomas to strangle Lili and dump her body in the backwaters. We come to learn of Jason's ulterior motives of acquiring a large family inheritance. Lili's father had divorced Lili's mother when Lili was very young. He remarried an American woman, with a son from a previous marriage. That son is Jason, the step-brother of Lili. Tormented on his deathbed by the guilt of his actions, Lili's father left the entire inheritance to Lili. Jason had to get rid of both Lili and Andy to acquire the wealth. In fact, right in the beginning, it was Jason who had mixed something in Andy's drink at the party, resulting in him falling asleep at the wheel and causing the car crash. Because they both survived, he plotted again; this time in a foreign country, as it would have been too risky to plot again in England. His plot would have been successful, but for the fact that the bait, Sara, actually fell in love with Andy, and he with her.