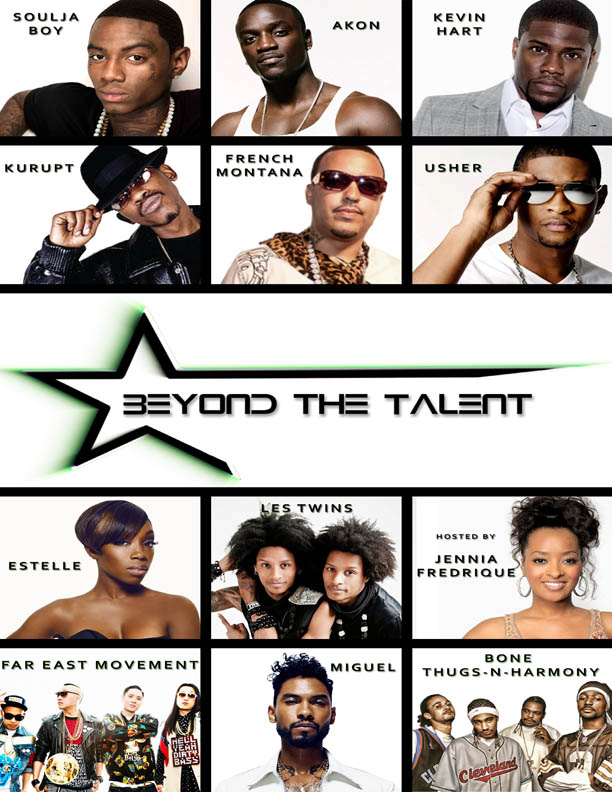 Catch up with the biggest names in urban/pop music for an up close one-on-one exclusive interviews. Host Jennia Fredrique will take you back stage, behind the scenes, on the tour bus and inside the dressing room, for intimate dialogs where your favorite artists share their secrets to success. Interviews with: Usher, Akon, New Boyz, Rick Ross, Omarion, Snoop Dogg, Kevin Hart and more.

Beyond the Talent is a unique celebrity interview series that features one-on-one interviews with some of the biggest names in Pop and Hip-Hop music, in which the artists reveal moments from their past and dreams that they’ve never shared before.  In the show’s first season, audiences will go up close and personal with USHER, AKON, T-PAIN, FAR EAST MOVEMENT, KEVIN HART, FLO-RIDA, NEW BOYZ, RICK ROSS, ZIGGY MARLEY and many more. Get insight on how they became who they are today and what its like to live the life of a mogul.  Find out what Usher has to say about working with Michael Jackson prior to his death and how multi platinum mogul Akon, who is responsible for signing Lady Gaga, has plans to buy a large Music Label. Go backstage, behind the scenes, on the tour buses and inside the dressing rooms where your favorite artists share the secrets to their success.